Twenty four hours after my toughest day to date with the kids I found myself in a completely different space with ample time not only to end my self imposed pyjama party and look after ZCP and ASH but also do some cooking. I thought Wifey was being overly optimistic and somewhat cruel when on leaving for work she let me know that one of her Marie Claire magazines was opened to a recipe that I might want to try cooking if I had time. As I perused the steps to make Barley, Bacon and Leek soup my reply was something along the lines of “Well seeing I didn’t even get out of my pj’s yesterday it is unlikely I will get time to boil an egg”. Not for the first time in our marriage I was proved completely wrong as I had a dream day with the kids and made the soup although on her return from putting 60 hectares of lupins in the ground Wifey did comment I might have used a bit too much vegetable stock. As a good friend of mine once said ‘feedback is a gift’…… 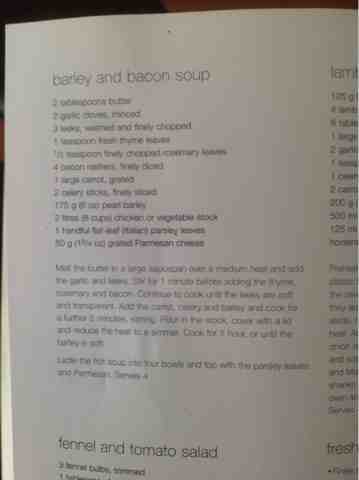 Recipe for aforementioned soup, remember to half the amount of stock!

Before I forget below are the translations from the ‘Farming phrases’ used in my last blog.

“F#&K me, looks like this ones heading just north of us” = Approaching cold front will not result in any precipitation for our farm

I have had several different reactions from blokes in terms of my current state of employment or lack thereof as far as some people are concerned. The comments have ranged from ‘your mad’ to ‘wow, how emasculating’ and everything in between. The majority of the positive comments have come, unsurprisingly from women and perhaps this is the main reason for some of the gentle jibes from the lads. In an attempt to regain some of my ‘masculinity’ through a testosterone charged experience I took the opportunity to go wild pig hunting or ‘pigging’ with my kiwi brother-in-law and two of his mates. Now my brother-in-law is one of the toughest blokes I know and his kiwi brethren would fall into the same category so the fact I asked to be part of this shooting sojourn carrying ZCP in a Baby Bjorn and holding ASH’s hand was in my opinion a feat of bravery to begin with.

While this may sound like the start to a bad joke please bear with me as their is a reasonably serious answer: What do you get if you cross three Kiwis, one Pom, 4 rifles, two cartons of beer and a mob of wild pigs? Well I can tell you one thing you don’t get and that is the likelihood of wild pork sausages as the on this particular night the lads and I wouldn’t have hit the water if we fell out of a boat or as was more to the point the dirt if we fell off the back of a ute which almost occurred on two occasions….

Being the only Dad at Mother’s group is a akin to being the stripper at a Buck’s Party in that everyone is initially really interested in what you have to offer until the time anything serious comes up in conversation. The other similarity is that both the stripper for surgical reasons and I for anatomical reasons would likely have difficulty breastfeeding. On the topic of breastfeeding Wifey and I had quite an interesting conversation a couple of days ago while she was ‘going round in circles’ (technical farming parlance for doing anything in a tractor/header) and rang to make sure I remembered to bring her breast pump up to the farm. It just so happened that the call coincided with ZCP being rather demanding in terms of wanting a feed and exercising his not inconsiderable lung capacity. Now I may be paraphrasing in places but to my mind this is a reasonably accurate recollection of the conversation:

Wifey: ‘Hiya, can you please remember to bring my breast pump up otherwise I am likely to be washing breast milk off the GPS monitor at somepoint this arvo’

(ZCP screaming his head off)

Me: No worries babe, will pack it now.

(ZCP still screaming his head off)

Wifey: Wow, the little man sounds like he needs a feed.

Me: Thanks for the tip, I am getting there.

Wifey: How long do you think you will be?

Me: Feeding ZCP or getting up to the farm?

Wifey: Well both but he sounds really upset so try and feed him soon.

Me: I am gorgeous but to be honest I would be interested to see how quickly you could get a feed for him organised if you had to boil the kettle, get your breasts out of the fridge, put them in a container with aforementioned boling water, heat them up to a non-freezing temperature and only then try and get him to feed. Needless to say we discussed this exchange in detail a bit later on and unsurprisingly I was found to have been the one at fault.

My last comment on this topic would be that as teenagers all boys imagine having a set of their own breasts for obvious reasons however I can unequivocally say that if you ever find yourself as a bloke on parental leave with a screaming 5 month old on your hands you will be wishing you had your own pair for completely different reasons.

My initial goal was for this blog to be weekly, however that has turned out to be almost as much of a challenge as being a stay at home Dad and a ‘Farmer’s Husband’. In my next instalment we will check in with progress at the childcare centre , explore the intricacies of air seeders and discuss in detail the importance of going to the toilet before you head out on a shopping trip with your 5 month old son in a Baby Bjorn.