Three kids and a sedated horse…

‘Go Dockers’ to anyone who would listen. Early on in the piece it was decided we would be a ‘mixed family’ when it came to supporting WA’s two AFL teams. ASH was drafted to the Dockers soon after her birth which was pleasing news to her Godfather and my best mate a Dockers diehard since the Freo Footy club was founded. As is the case with most second born children ZCP didn’t have a choice and was indoctrinated to the Eagles faithful to even up the ledger.

It was actually due to Wifey my best mate and I had the opportunity to attend the GF thanks to her decision not only to organise a couple of Freo country memberships but also to pay the $30 upgrade to guarantee a ticket to ‘the big dance’ should the purple army get there.

Was lucky enough to have been at some of the best wins the boys had this season Collingwood at home, the dismantling of Carlton at Ethiad and biggest of all to this point the Prelim demolition of Sydney at the Patterson Colliseum.

Am I the biggest Docker fan going round? Definitely not although it’s fair to say the ‘Purple Passion’ runs fairly deep with me.

It was about an hour before I was due to embark on my first of two flights en route to the MCG when TNN (The Nordic Nanny for those of you who may have forgotten) woke ASH from her afternoon nap.

Thirty-five minutes later we were at the regional hospital’s Emergency Department with my little princess sporting a temperature over 40 degrees and a massively accelerated heart rate. Despite a very scary moment on the drive in where I thought ASH had lost consciousness she was given the all clear to go home with a fairly militant virus identified as the cause of such a rapid decline.

In a very sweet gesture one of the amazing nurses who had looked after us gave ASH a purple balloon to match her jumper and was rewarded with a very tired but heartfelt smile from my little girl.

Now, if my life was one of those annoying movies where in the last two minutes the entire plot is resolved through a series of photos with a voice over from the main character it would have gone something like this.

Photo 2- Family jumping into car with me wearing my Docker’s scarf and holding a pre-printed Qantas boarding pass.

Photo 5- DC and I in the background of a picture featuring Ryan Crowley headbutting Buddy Franklin.

Photo 12 – Me (wearing Dockers scarf and holding a half empty bottle of scotch) being welcomed home at airport by a glowingly healthy ASH, non farm clothed yet still ravishing Wifey and a slightly less disinterested looking ZCP.

Unless I have attracted a couple of A-list followers to this Blog everyone reading this knows life is not like a movie. The reality in this case was that I missed my flight, we had a fairly rough night with both the kids and ended up back at the Doctor’s the next day where ZCP was diagnosed with an ear infection.

Did the Dockers win their first flag? Well I don’t know the answer to that one as the game hasn’t been played yet. What I do know is that DC managed to get his eldest brother to accompany him on the trip and I sincerely hope they get to see Pav lift the Cup (although Photo 5 coming to fruition would almost be as satisfying).

In this instance being a Farmer’s Husband meant making the trip to emergency with ASH on my own as Wifey was shearing on the farm and the best part of an hour away.

Luckily we are not that far from a hospital and after ASH was safely tucked up in bed after our somewhat harrowing ordeal I did spare a thought for those families with very young children who are hours away from medical services.

While certainly one of my toughest days as a Dad and a Farmer’s Husband nothing puts your life into perspective like seeing one of your children really unwell, in this instance it was the little girl in the jumper with the balloon who was my true ‘Purple Passion’. 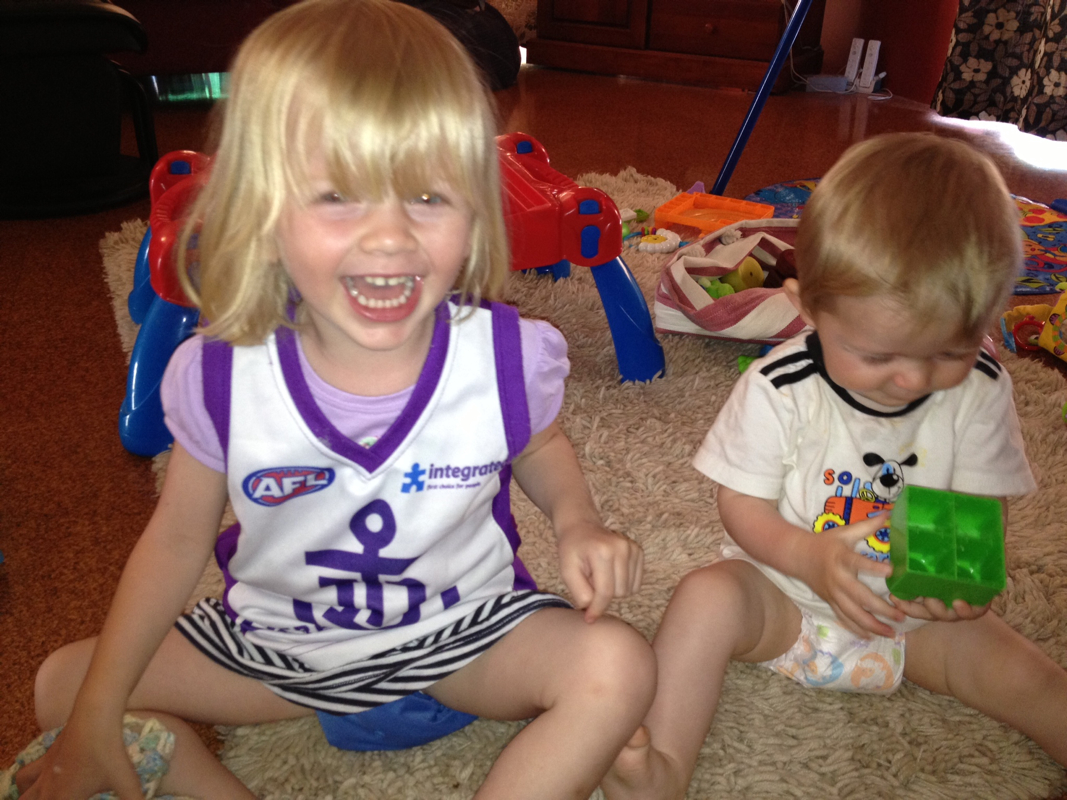