Does not seem possible that my three months parental leave has dwindled down to 12 days however on July 29th I will spend my first day back at work travelling from Geradlton in WA across to the city famed for an opera house, a harbour and a chip on it’s shoulder for not being the nation’s capital. Flying is one part of my job I have not missed and it was with some satisfaction that I recently realised for the first time in 5 years I will not have flown enough to qualify as a Gold Frequent Flyer with Qantas.

This will only be my fifth blog as a stay at home dad however Wifey has convinced me that as this is called ‘Diary of a Farmer’s Husband’ that I should continue writing it even after I have gone back to work. This is something I have committed to do however with my imminent return to work I am already getting completely roped backed into corporate life and am wondering if I will have the time.

I had my first mini-meltdown last week, with Wifey going to a well deserved (that was well deserved not well needed, although in fairness both descriptions were apt) hair appointment and then onto dinner with a friend. I would imagine that Wifey would just have been having the colour washed out of hair when ZCP started the kind of ear piercing inconsolable crying that is impossible to comprehend unless you have lived through it. Not wanting to be outdone ASH adding to the cacophony with her own not unimpressive wailing.

The end result saw me sitting on the edge of our bed with one on each knee wondering a. Is there anything seriously wrong with our kids b.Will my ears ever stop ringing and c. Should I do what I promised myself I would never do and text Wifey ‘Help, please come home’. In the end I went with c. and my wife outdid herself by talking the hairdresser into getting the apprentice to help blow dry her hair and get home for 45 mins before going to dinner.

In this 45 mins my miracle working wife managed to not only placate both children and get ZCP to sleep but also consoled me with a packet of my favourite beef jerky and a can of Mother. I was also directed to half an hour to myself before Wifey headed out to dinner. In all honesty I actually felt a little emotional about ‘failing’ in having to text Wifey which led to a bloke’s version of eating a tub of ice cream and watching Sex in the City in the form of chewing on dehydrated meat in front of a very violent ‘sword and sandals’ epic called the Immortals.

As has been the trend during my time at home a tough day has been followed by a good one, in this case it wasn’t necessarily that the kids were awesome but moreover that the funniest thing that’s happened since my leave started occurred. Having successfully got ZCP down for his morning nap i found myself busting to go to the tolilet (number ones) and as such headed off to the bathroom in a bit of a rush. In my haste (fortunatey I didn’t have button fly jeans on this time) I left the toliet door ajar and as a result was soon startled by ASH’s cute little voice saying ‘Ello Daddee, wat ooh doing’ all I could really do was say in a bit of a panicked voice ‘shut the door sweetie, shut the door’ what happened next was one of those slow motion moments you sometimes experience in life. As only a toddler could my instructions were completely mis-interpreted and with reflexes similar to that of steroid taking cat my darling daughter darted forward and slammed shut the toilet seat and lid.

Now any lads reading this blog will appreciate the difficulty of ‘cutting it off midstream’ particularly when you are busting, despite my best effort I failed in this endeavour and so it was a few minutes later that I found myself on hands and knees cleaning my own urine off the bathroom floor instead of the kids misdirected offerings. I would like to think that ASH’s almost maniacal laughter at the time I was mopping up had nothing to do with what had just happened and was actually related to something Sofia the First was doing on Disney Jnr however when it comes to toddlers who knows???

Anyone who has been involved in farming will be familiar with the term succession planning and for those of you who do have a property in the family the mere mention of the process may have sent an involuntary shiver down your spine. My initial feeling when discussions around succession planning started were that it seemed a bit like a will being drawn up with all family members having input into what should, could or might happen. Anyone reading this not from an agricultural background will probably be thinking to themselves ‘Wow, that sounds like a nightmare’ and in that assertion you would be right.

While I obviously won’t be going into too many details I will keep everyone updated on the progress as our extended family journeys through the many twists and turns of this highly emotional and somewhat bewildering process.

I will finish off with the harrowing tale of my experience at the Target Toy Sale, I honestly thought that buying beer at Dan Murphy’s the week before Christmas was the most intense retail experience facing man until I walked into the Colosseum that is created when half price Barbies are at stake. I would love to believe it was my chilvarious nature that let the 5″2 mother of Eastern European extraction take the last Jake and the Neverland pirates ship however having a Mum who is half Polish I am well aware of the wraith this kind of woman can bring down on any unsuspecting male and as such I meekly surrendered my only chance to snaffle any of the real bargains.

As with any initial defeat I will learn from this experience and will be sure to put in a solid pre-season at some of the lesser sales around town before once again facing off in the only sale that matters when you become a parent.

My next blog will be my last as a stay at home Dad and as such I will reflect on the past three months while trying to compile a list of tips that might be of use to any Dads looking to go down this path. I will also shed some light on the challenging task of securing an au pair and continuing the foreign flavour will introduce into our tale a Irish and Polish addition to the farm. 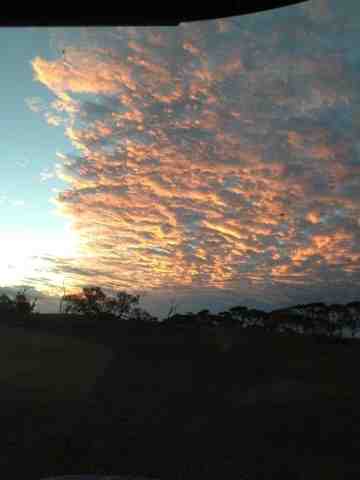 Sundown in the Vineyard paddock, no grapes unfortunately but always a solid lupin yield. 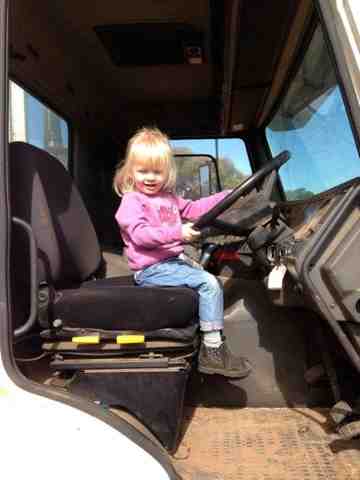 ASH in one of the trucks, her Mum insists she is already a better driver than me…. 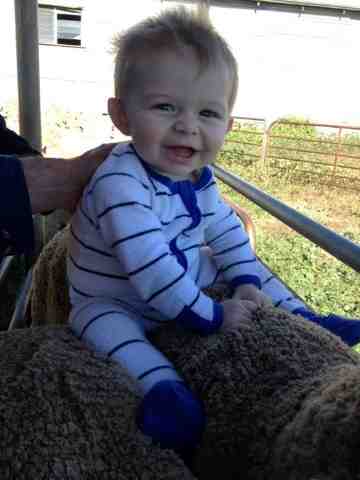