Adelaide, airports and a year in review

For those of you who have been following my ‘Diary’ for a while you may remember me make mention of a Sheep Management course in the Clare Valley that Wifey won a scholarship to attend. At the time I half jokingly said that it looked like ASH, ZCP and TNN would also go over as I had to work in Melbourne that week. Well as it turned out my half joke became a complete reality and then some with Wifey’s parents also making the trek to South Australia.

While queuing up to check-in with the whole family and carrying more baggage than the Kardashian family I had a flashback to a time when I was merely a farmer’s boyfriend and we were heading to a wedding in Sydney before spending some time in the Apple Isle. I remember looking at a family with two young children along with car seats, prams and various other kids accessories lining up to check-in and saying “No way I am never doing that, how stressed out do they look?”……. funny how things change.

Wifey’s week in the Clare Valley was incredibly worthwhile if not somewhat stressful for her as well as TNN and indeed my in-laws however the experience gained should prove very useful as Wifey looks to move the farm business forward. Unsurprisingly, the week culminated in a radio interview on the SA Country Hour for my ‘media tart’ wife in which she again unsurprisingly sounded quite the polished radio guest.

The agricultural institution which is the ‘Country Hour’ is something that I now regularly listen to, indeed it has gone from being an extremely annoying interruption to the cricket during the summer months to one of the most accessible resources in my ever continuing quest to become farm literate.

As had been originally planned I flew into Adelaide from Melbourne on February 14th and for the first time since Wifey and I met we spent Valentines Day (well at least some of it) together. Interesting that we will have been married 4 years in April, have two children and for that matter an au pair but have never spent ‘Hallmark Day’ as I like to call it together.

This is due solely to the fact that the company I have been working with for 12 years while fantastic in so many ways do routinely schedule it’s annual conference for the week that includes Valentines Day. Now PW (Pre-Wifey) this wasn’t such a bad thing as it saved me from any number of awkward situations not to mention truckloads of cash however these days it would be nice to spend it at home or at the very least with Wifey.

With the help of some favourable QANTAS flight schedules and the understanding of my boss I did indeed get to have dinner with Wifey on Valentines Day at a great restaurant called The Lion in North Adelaide. It would be fair to say it wasn’t your standard romantic interlude as we were joined by my in-laws for what could legitimately be classed as one of the more odd double dates of all time. I am fortunate in that I have a good relationship with both my in-laws so what to some of you may sound like a more painful experience than root canal work with no anaesthesia was in actual fact a very enjoyable evening. Probably the highlight occurred well into our second bottle of red when with Kissa and Wifey discussing the wheat price and haggling over how much to spend on the new sheep-yards MIL (Mother-in-law) embarked on a hilarious analysis of the future the young couples on surrounding tables had (or in her belief didn’t have) together.

After a reasonably cultural weekend in Adelaide which included a visit to the South Australian museum and some shows at the fringe festival for TNN we headed back to the Central West and the farm in a reasonably exhausted if not content state. The putting in of new sheep-yards was the first thing on the agenda as well as organising the budget and paddock plan for the upcoming season.

While the latter two jobs equated to a lot of office time for Wifey the burden was somewhat reduced in the form of our new workman who for the purposes of this blog will be referred to as ‘Kiwi Kev’ or in the spirit of my acronym fetish KK. Not since Marlborough Sav Blanc and Russell Crowe has a New Zealand product had such an immediate and positive (well in the case of the wine anyway) effect on Australia.

KK had only been working with us for 6 days before the family’s mass exodus to South Australia for a week and the fact there were only two phone calls (both initiated by Kissa) to see how things were going speak volumes to the quality of the bloke.

Another huge plus side is that KK has a large family which means one more pupil attending the local primary school, another kid on the Geraldton high school bus run, as well as an entire family keen to contribute to the community in general. In a time where smaller regional towns in WA are shrinking, some would say dying partly due to the purchase of multiple properties by corporate farming interests it is nice to see worthy additions to the population of the quintessential country town.

Keeping on the theme of smaller regional towns and the services they provide or more accurately need to provide I have mentioned in previous blogs my involvement with the local Childcare centre. At our recent AGM I stepped down as President and despite having been in the position for just under a year I can honestly say that what we achieved as a committee constitutes one of the proudest times in my life. I have been fortunate to have a reasonably successful career to date and some sporting achievements when I was younger but being involved in not only saving but indeed putting this organisation into a position of strength and sustainability tops everything other than of course being the husband of a uniquely amazing woman and a Father to ASH and ZCP.

Interestingly, (well to me anyway) is that my journey as a ‘stay at home Dad’, a Blogger and President of a Childcare centre started within a few weeks of each other. Each of the experiences in different ways have been big influences in my life over the past 12 months and now with me stepping down as an office bearer with the Northampton Childcare Association two of three the journeys are over.

Who knows how long this ‘Blog’, ‘Diary’ or as I like to think of it ‘ramblings’ will last however regardless of the timeframe I know I will be the better for having written it. What is somewhat gratifying is that obviously somebody is following my experience as a farmer’s husband as those of you who read the Farm Weekly will soon discover.

Wifey and ASH at Adelaide’s “Club Tarmac View” having coffee 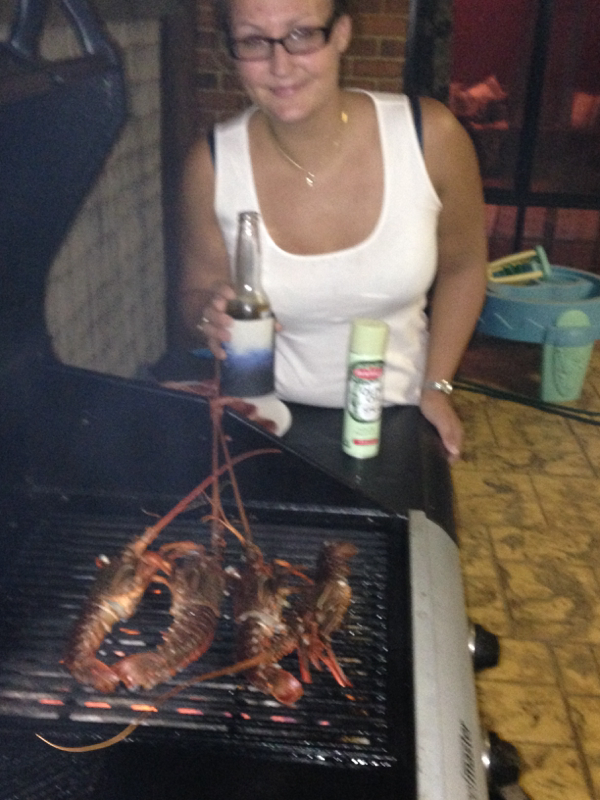 TNN with the crays and Corona I mentioned in last Blog 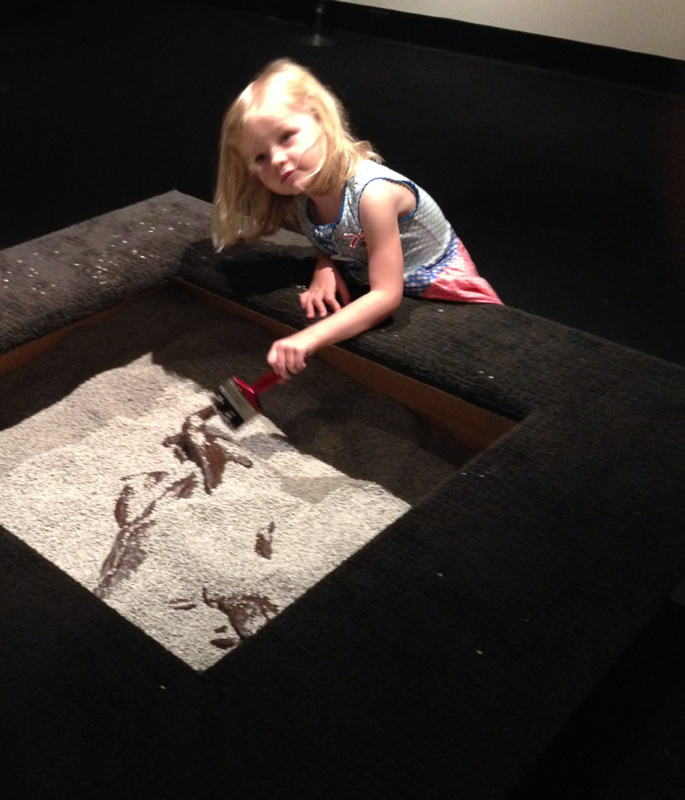 ASH discovering fossils (other than his Granna) at Adelaide Museum 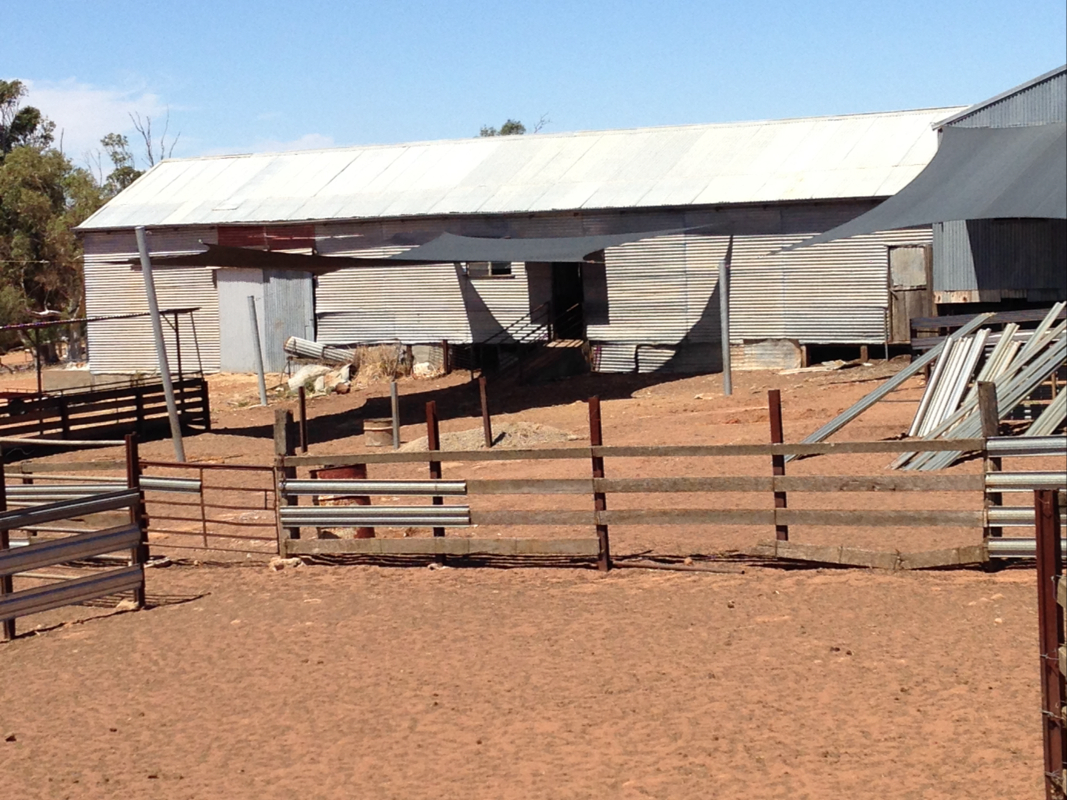 The much debated new sheep-yards in progress