There is in fact one link to rural Australia I had established before I met Wifey and that came in the form of John Williamson and his music. It was soon after my family emigrated from the UK that a neighbour introduced my Dad to the album True Blue and while I came to know all the lyrics to songs like Cootamundra Wattle and the Budgie Song it wasn’t until I started spending time on the farm that I learnt the true meaning behind some of those words.

‘Will you tie it up with wire just to keep the show on the road’ is one of John Williamson’s lyrics that has come to resonate with me on more than one level in recent times. One reason is that I can think of numerous times when I have seen Kissa quite literally use a piece of wire to fix a gate, secure one of the air seeder’s knife points and on one memorable Sunday afternoon hold in place a baton on a busted cray pot so we could bait it up and chuck it over the side of the dingy.

The serious side to this is from what I’ve seen Kissa and his contemporaries often employ this mentality when it comes to themselves and the various ailments and injuries that occur during a life spent working on the land. Indeed during my relatively brief time at Mulga Springs I have seen Kissa and to a lesser extent Wifey head off to work nursing injuries or illnesses that would see an office worker take the day off work let alone someone embarking on a day of physical labour.

One recent example was that of Wifey injuring her back reasonably seriously yet protesting to me that she couldn’t possibly take time off work based on what was coming up. Having considered tying her to the bed (which under other circumstances might have been a fantastic idea) in the end it was Kissa and MIL (Mother-in-law) who convinced Wifey that she had to rest and recover. This argument made a lot of sense as they were soon to head off on a well deserved four week trip to South Africa and Wifey would be running the show in their absence.

It was around this time and still ‘Nanny-less’ that Wifey and my schedules reached a critical mass verging on unsustainable. In the space of 7 days we had to manage two farming field days (one of which Wifey was speaking at), me having a three day work trip to Adelaide, my birthday, our wedding anniversary plus the arrival of our new au pair (hurrah!) and ASH’s 3rd birthday party.

I can vividly remember a time during that week when I thought “we can’t do this long term, there is no way can we do this” at which point with the timing that only a child could manage I first heard and then saw ZCP bashing a toy tractor with one of ASH’s tiaras. Now knowing full well that ASH would go ballistic if she saw one of her fashion accessories being violated in such a manner I should’ve stopped him straight away, however all I could think was “well the little man seems to be dealing with this week okay, time for me to go find my own version of ‘tiara tractor trauma’ to get me through”. In the end it was our Mums who came to the rescue and ensured we did survive that week, I also found my own version of tiara tractor bashing by way of a quick luncheon debrief with one of my sisters in law who shall go by the name of Charlotte and helped put current events in my life into perspective.

As is often the case in times of high stress valuable insights can emerge that otherwise may have remained hidden with this certainly being the case in this instance.

1. Our family life could not function without an au pair as it is currently set up. Not that I ever thought we were hiring a nanny to enable me to play golf three times a week and for Wifey to have long lunches and pedicures but I have questioned whether or not we could find a way to do everything we need/want to without assistance. Answer is, we couldn’t.

2. Mums always seem to know when their kids are at breaking point. Whether it is giving you a day off school as a 12 year old just because you asked and were feeling a bit flat or telling you as a 38 year old “Whatever it is you need over the next few days just tell me and we’ll make sure it happens” they always seems to have your back.

3. A little boy of 15 months wielding a tiara can do almost as much damage to a tractor as his 64 year old Grandfather can with a tool kit.

The combination of having some time off and a lot happening at the farm is giving me the incentive and opportunity to pump out some blogs which is great as next time I am keen to talk about Wifey’s inaugural public speaking engagement as well as our new au pair’s first couple of weeks in Oz. 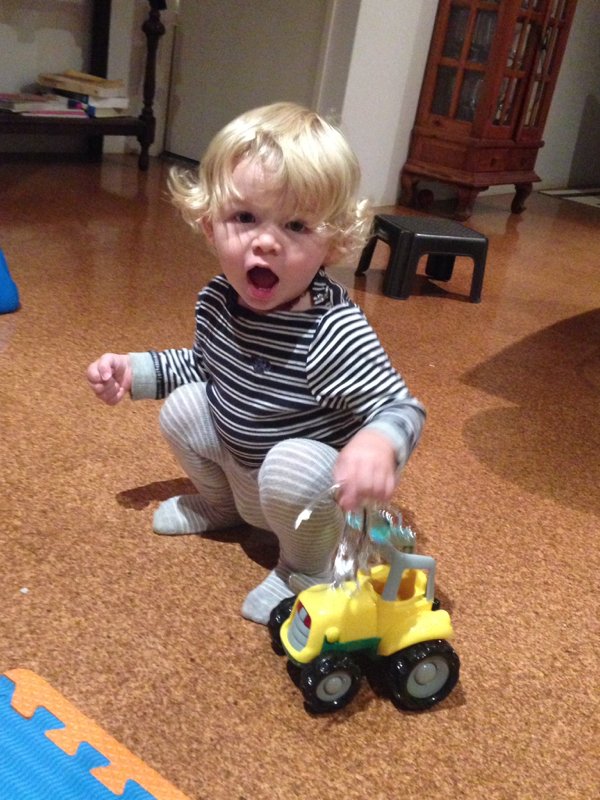 The best reenactment shot I could get of ‘tiara tractor trauma’ 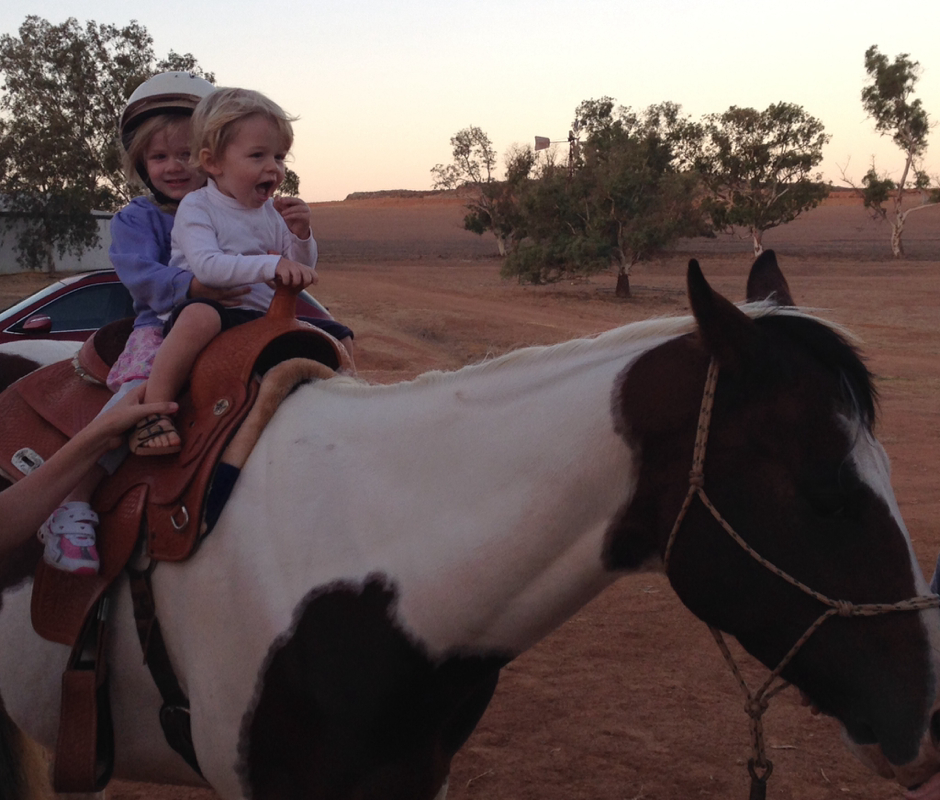 ASH and ZCP’s first proper horse ride, more on this disturbing development in my next blog