From spreadsheets to show day…

A smorgasbord of sheep.

“Doing the books” is the term most commonly used for the quite considerable amount of work that goes into keeping track of the finances at Mulga Springs. This generic term can cover anything from the simple processing of invoices to getting the BAS sorted, to preparing documents for the accountant and even chasing up the odd supplier who may have overcharged us. In the PK (Pre-Kid) era when I had ridiculous amounts of free time I “did the books” for six months as a way of familiarising myself with the business and also to help out MIL who at the time had an incredibly busy job running palliative care services for the Midwest region.

What I found almost beyond belief was the staggering amount it actually costs to keep a farm running.

Things like wages, paying contractors as well as repairs and parts for machinery were all costs I had anticipated it was items like fertiliser, chemicals for spraying, feed for the sheep etc etc which made me to begin to understand the immense financial pressures anyone running a farm is under.

As a completely naive BOAF (Boyfriend of a Farmer) I can remember thinking “Fertiliser? What do we need that for? Surely the crops will be fine with just the rain we get”.”Chemicals for spraying, what are we spraying the crops for? That sounds a bit dodgy to me”. “Feed for sheep? That is ridiculous! I drove around the farm yesterday and it looked like there was sh&tloads for them to eat!” yes folks I was that green and although as time passed I discovered all the reasons why Mulga Springs needed the aforementioned items I will always remember my initial reaction to seeing the financial machinations of farming.

This time of year at Mulga Springs it is very easy to become consumed with how much rain we have or more likely haven’t had, what the wool price is doing and of course how the crops are looking. Based on all this ‘The Show Season’ which in our part of the word includes the Chapman Valley and Northampton Shows is a welcome distraction.

I am not overstating it in saying that Cher would have been impressed with KK’s effort to ‘turn back time’ at the recent Chapman Valley Show where he put in a sensational effort by winning one and getting third and fifth place respectively in three of the several shearing competitions on offer. What made his performance even more impressive was the fact he was going up against blokes in some cases half his age and more than holding his own.

With KK’s success in the shearing almost equaled by his girls in various equine events it would be fair to say the Marshalls had a great day out at the show as no doubt many other families did. This occurred in despite of or in the case of a lot of farming families in attendance because of the weather with two monsoonal like downpours occurring in the couple of hours we were there.

In regards to the weather for me it was literally a case of not knowing whether to laugh or cry and please bear with me one this one folks as I am about to go on one of my esoteric rants that people close to me dread and people I work with find somewhat bewildering.

Perhaps due to the fact Wifey and I were both verging on the First World equivalent of physical and mental exhaustion (too much flying, minimal sleep and lack of caffeine) but more likely because TJ wasn’t accompanying us we found ourselves poorly prepared for the inclement weather. Topping the list was the fact we left the stroller at home and with ZCP currently weighing in at an impressive if not somewhat needy 14kg this meant one of us was going to be carrying him around for the soggy duration. Allowing ASH to choose what shoes she could wear was number two as while Wifey and I (and TJ for that matter as she taught her) are all very proud that our little Princess can put her own shoes on would have preferred she hadn’t gone for the pink ballet slippers which were summarily put through the rigours of every puddle she could find.

Lastly, while we had at least remembered to bring an umbrella Wifey and I created a memorable and expletive laden version of “no, you’ve got the tickets haven’t you darling?” when faced with the first downpour having left the second most important type of synthetic protection known to man in the car.

The experience of being at an event which is held exclusively outdoors, attended by well over one thousand people and affected by rain brought to light another one of the ever growing list of anomalies that to my mind will ensure that the farming community and city dwellers will never quite understand each other. Whereas organisers of the Wanneroo or Osborne Park Show might see such weather as verging on a catastrophe the two Chapman Valley show committee members Wifey and I spoke to were struggling to keep the smiles off their faces at the fact it was raining. Combining my gift as a smart arse with my desire to be a journalist I tried in vain to get one of them to concede the rain was a bad thing however my line of questioning was somewhat lacking and inevitably we ended up talking about how good the rain would be for the crops in the district.

It just occurred to me that being married to a Northampton local such a focus on the Chapman Valley Show might be seen as reprehensible at best and at the worst treasonous although as my next post will be focussing on the Northampton Show and the Northern Stud Breeders association field day and ram sale I may be forgiven. On a personal note I am excited at this prospect as it will afford me the opportunity to introduce some new and highly entertaining characters into the world of DOAFH. 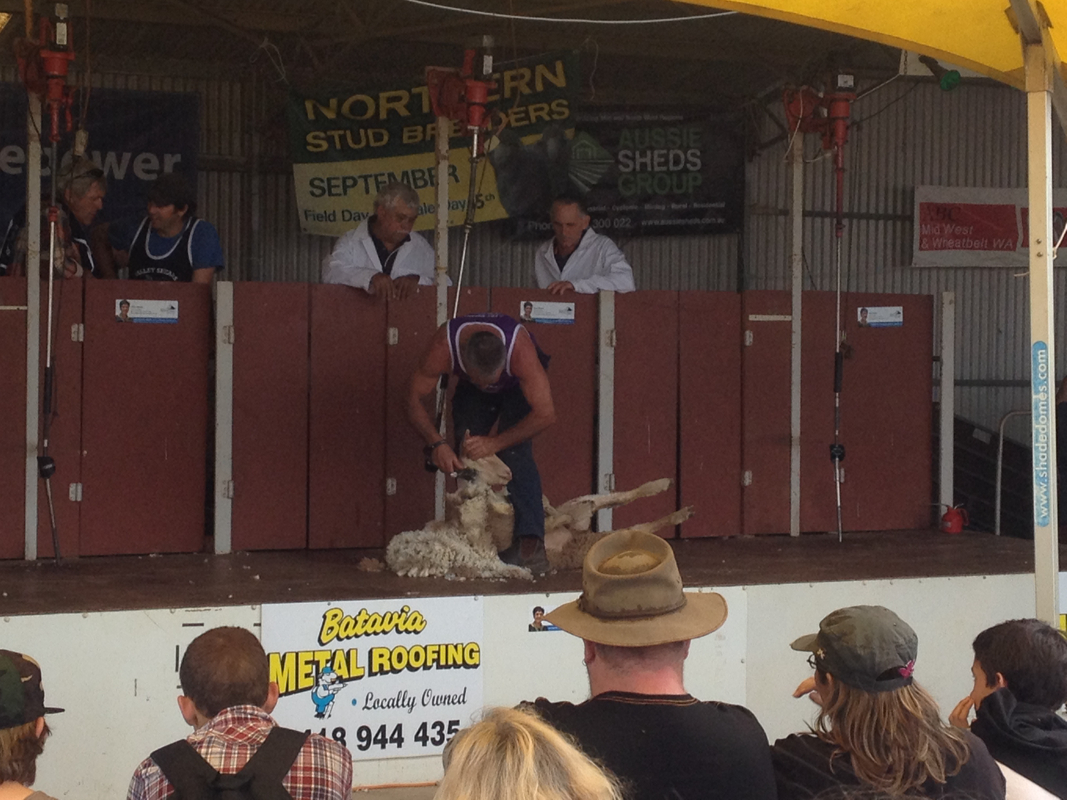 KK and his guns shearing 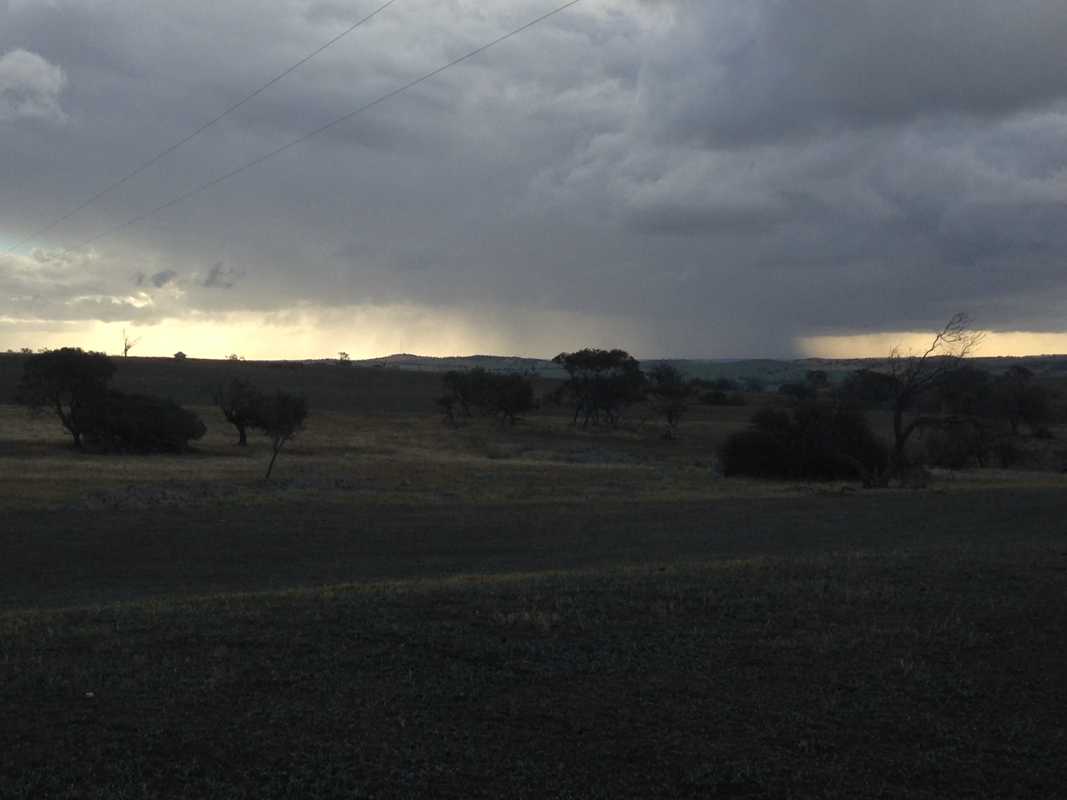 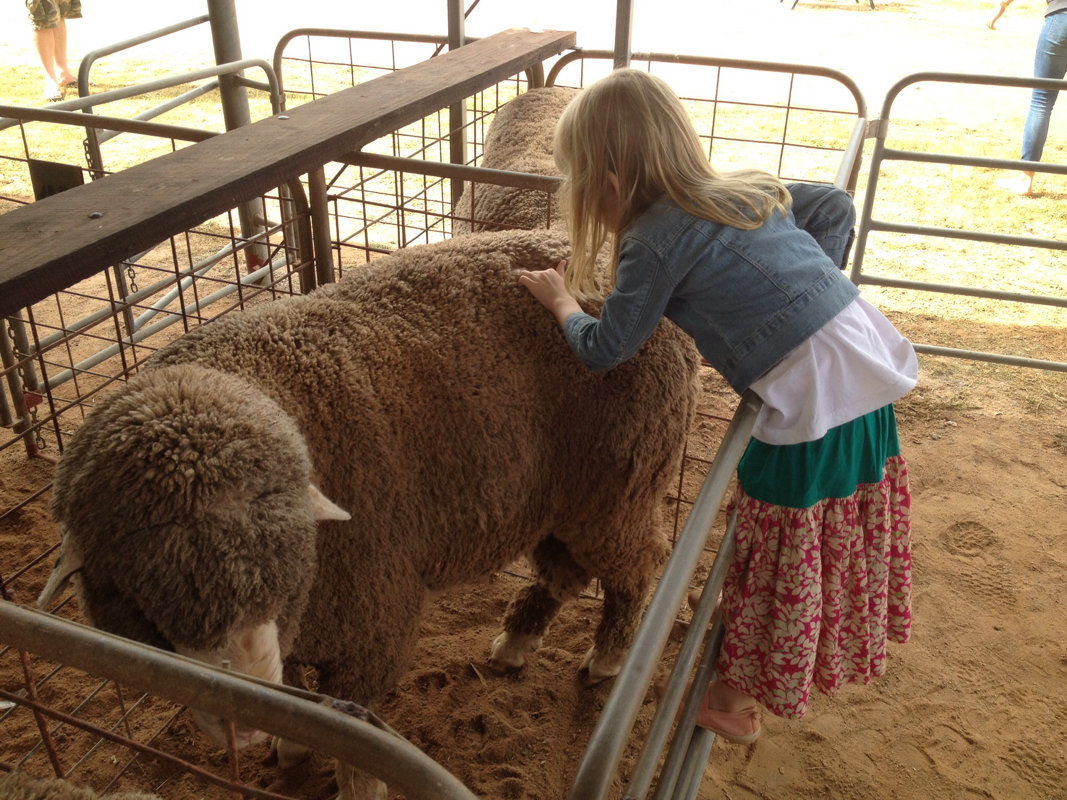