Some time ‘off farm’

While the origins of the rain dance are well documented and can be traced back to Native American tribes such as the Cherokee the invention and subsequent use of the ‘Grain Dance’ is still somewhat of a mystery. While I will leave the attached video to demonstrate the finer points of what this important ritual looks like I will do my best to explain why it is needed.

The art of harvesting aka ‘getting the crop off’ or ‘going round in circles’ is the agriculture version of the Hawaiian Triathlon in that the emotional and mental strain equals and in some cases surpasses the physical exertion required to complete it. In terms of how long it takes we are talking in terms of a couple of months depending on the size of the property and what machinery is being used. Now during any task that takes this long mistakes are obviously made, some due to fatigue, some to loss of concentration or in my case being someone who’s only experience with machinery came in the form of a Lego Technic set I received as an eleven year old and subsequently never opened.

The need arises for the aforementioned ‘Grain Dance’ when a small (well hopefully small) amount of grain ends up being deposited on the ground rather than in the ‘chaser bin’, the ‘field bin’ or the grain truck. While these are the main reasons for the grain dance ceremony to be initiated I have also seen it required when a truck driver forgot to shut his tailgate.

Now for those avid non-farming readers of DOAFH the terms mentioned in the last paragraph should all be familiar to you however if this isn’t the case fear not as I am currently working on a ‘harvesting for dummies’ skit of sorts that will hopefully appear in my next Blog.

Anyway let’s get back to the pile of grain on the ground. After the obligatory string of curses that would make Billy Connolly blush the offending party will start shovelling the grain into a hessian sack that is then poured back into one of the field bins, this task is traditionally carried out at a rather rapid pace in the hope (almost always in vain) that someone won’t see you doing it although in my experience even when you think you have got away with it Kissa always seems to find out. It is when either the pile gets too small to shovel or the offending party cannot be bothered shovelling anymore that the grain dance comes into play.

It was during a recent stint of shovelling that I suffered my latest in a longline of reasonably serious farming injuries, as usual in situations like this as a Farmer’s husband I didn’t make a fuss and just got on with it despite the pain I was suffering. I am afraid to say the same degree of fortitude was not shown by Wifey who on the same day had a minor run in with an old ewe that resulted in some superficial cuts and bruises, although you would have thought my beloved other half had been in a UFC bout the way she carried on about it.

In the photo gallery you will find pictures of our respective injuries and I will leave it up to you to decide whether my assessment of the situation was accurate, in my mind it is plainly obvious who suffered more….. There is also a screenshot of the text messages surrounding Wifey’s injury that on reflection gave me a bit of a chuckle and that I thought you might enjoy.

Sticking with the theme of farm related ailments Wifey recently suffered a case of the dreaded ‘Fly’nusitis. This somewhat rare condition occurs when a blowie (blowfly for those not acquainted with Aussie insect slang) lodges itself in someone’s sinus cavity having flown in via the nostril, the winged intruder invariably dies quite quickly but not before causing nasal pain comparable to snorting a line of wasabi. While obviously feeling sorry for Wifey it was hard not to laugh every time the fly made a dash for freedom causing her head to gyrate in somewhat amusing manner.

As I mentioned in my last blog we had a new German au pair join our family recently and as with anyone involved with our somewhat unique situation Mulga Springs had an immediate effect on her.

The plan had always been for Rins (I knew it wouldn’t me long to come up with a nickname) to arrive in early October and have a few weeks to settle in before harvest started. Not for the first time the unpredictable nature of farming held sway and harvest was already underway by the time Rins arrived in the Midwest meaning her first two months will be flat out.

It is fair to say that this hasn’t bothered her in the slightest, mainly due to an impressive “let’s get this done” attitude and a week long handover with TJ which was a very important and special parting gift. TJ if you are reading this, thanks again for that extra week, it made such a difference to us all.

The other immediate effect Mulga Springs had on Rins was during her first day ‘on the farm’ when be took her to view sunset from the top of the house paddock, she was blown away by the experience and was almost as impressed when later that evening when she got to look at a clear night sky and the overwhelming amount of stars that were visible.

Harvest is obviously still in progress for us and probably will be for some time due to it’s stop/start nature this year. This is due to some unseasonally damp weather that often sees the moisture levels get too high to enable harvesting to take place, hot weather is the key this time of year which is ironic as it was unseasonally hot weather in August that damaged a lot of people’s crop and will lead to an average crop at best.

Having said all that farmers in the Midwest don’t have too much to complain about compared to some of their peers in the Wheatbelt where a deluge in mid October caused extensive damage and will no doubt put some farms under unsustainable financial pressure.

Rereading those last few paragraphs I can understand why people outside of farming areas sometimes think that farmers are never happy with the weather. In relation to this there seems to be a general misconception that “at least the farmers will be happy” whenever it rains, regardless of what time of year it is when this is not the case.

The simple rule of thumb that I have used over the years and which has saved me from making inappropriate and no doubt infuriating comments to Kissa when it is raining is as follows.

Picture the first Saturday morning of the year when you wake up put a pair of shorts and a t-shirt on go to buy the paper or get a coffee and when you get back home you immediately replace the shorts with a pair of jeans or trackies.

This is the time of year when farmers want it to start raining,

Later that year when you start seeing advertisements for outdoor musical festivals and cricket is on the radio this is when farmers want the weather to start and more importantly remain hot.

Before finishing up I just wanted to say thanks to all of you who commented on the video based around Wifey and Mulga Springs. It was lovely to hear such positive feedback and as some of you mentioned it will be great to share the footage with the children although I think we’ll wait for a time in the future where ZCP isn’t continually throwing his toy tractor at the computer screen. 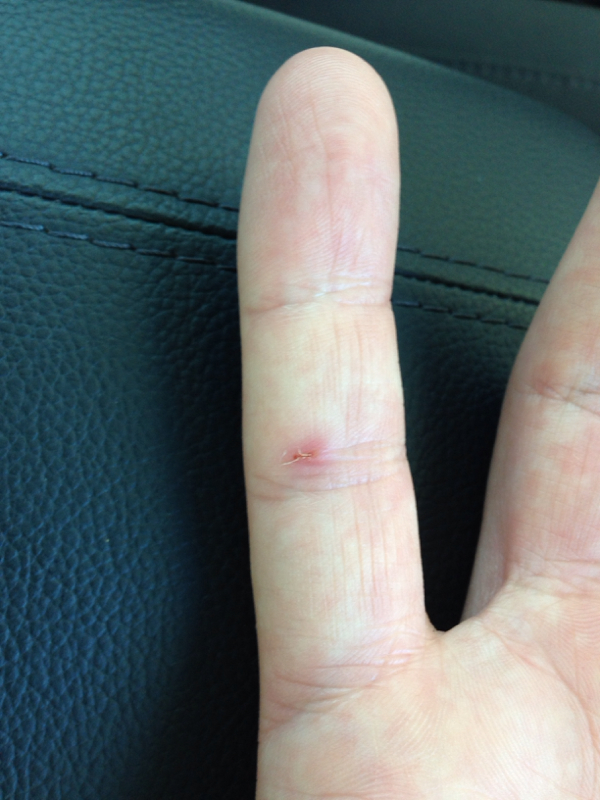 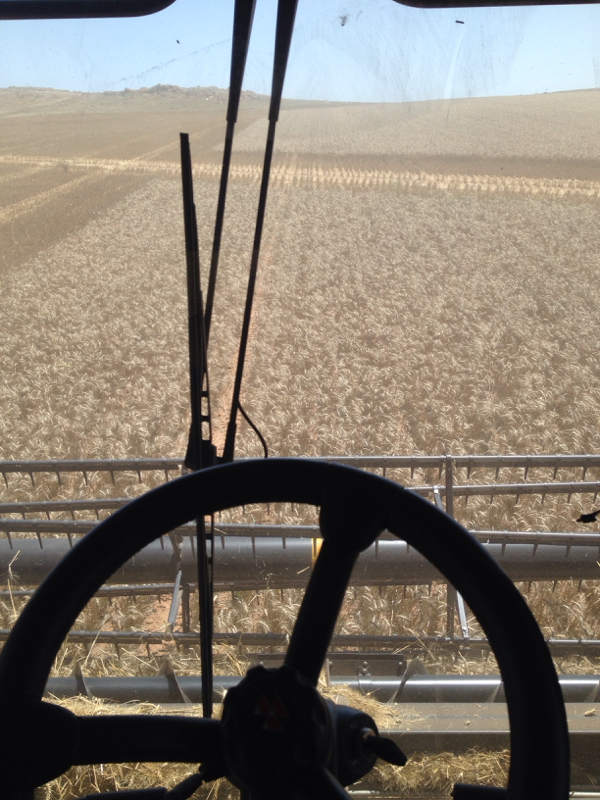 ‘Yield of dreams’ – well maybe not this year… 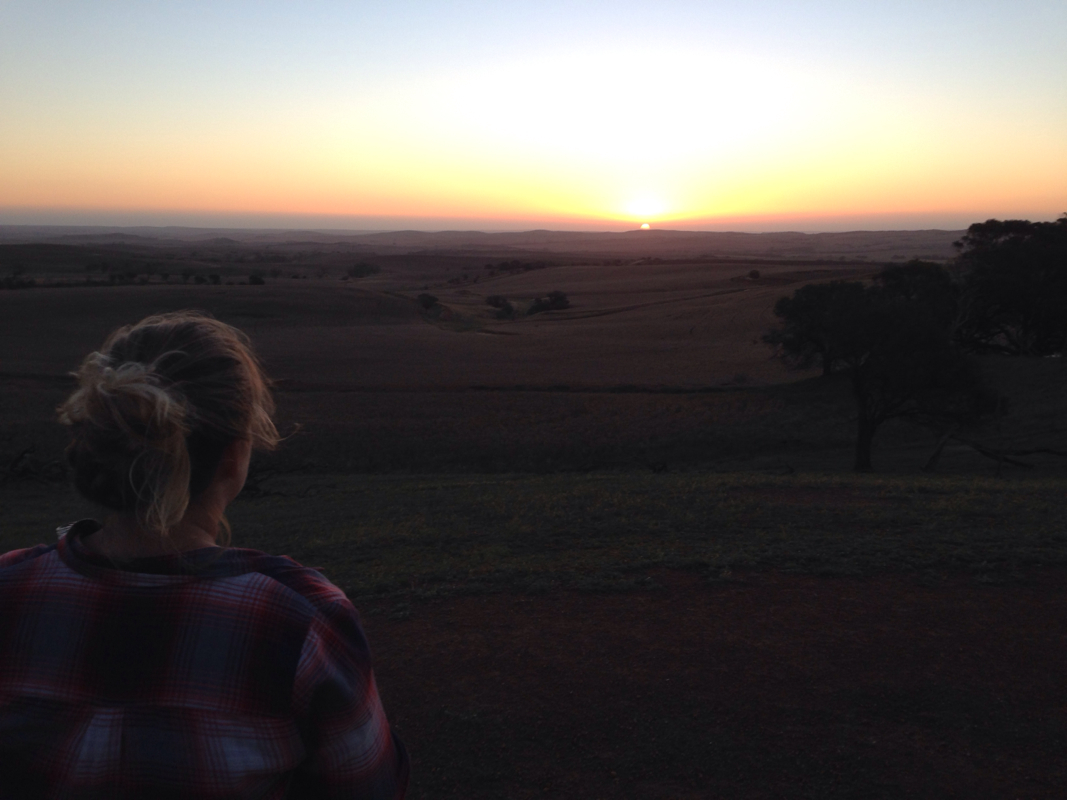 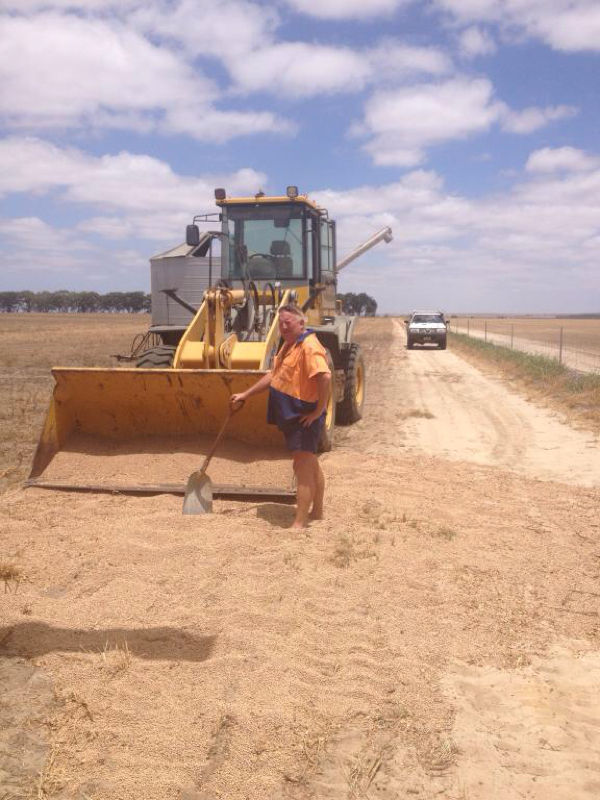 ‘Nuts’ the truck driver and his little spillage. Took a lot more than the grain dance to sort this out…..