Some time ‘off farm’

Most years are punctuated with periods where there is so much going on you are not sure how you will cope, what I like about times such as these is the blissful aftermath when even if things only marginally slowdown it feels like a holiday to some degree.

In terms of how our life will look on and off the farm for the next 12 months to my mind the trend was set when we went straight from harvest into shearing. This ‘back to back’ formula is one that I see continuing for 2015 and I will be interested to see what the end result is. Adopting this approach already claimed it’s first victim in the form of yours truly as the post harvest celebration and the ‘cutout’ actually took place on consecutive days.

A fantastic lunch at Tides restaurant in Gero with Kissa, MIL, Wifey and of course KK and his lovely wife ended up being a bit more of a boozy affair than was expected. This coupled with an impromptu bender that arose when I agreed to meet my brother and one of his mates “for a couple of beers” led to me being much the worse for wear on the day of the cutout.

The shearers of course were incredibly understanding and didn’t give me a hard time at all when I arrived at the shearing shed and proceeded to not drink a single beer due to my chronically hungover state…. In case you missed the sarcasm in that last sentence or haven’t met a shearer in person I can inform you that they were nothing short of merciless in sledging me for not partaking properly in their celebrations, this was made worse by the fact that at last year’s cutout I was one of the the last to leave and I think some of Dave Fry’s team were expecting a repeat performance on that front.

There is a common held and to my mind reasonably accurate belief that if you hang around long enough in life some things will go full circle, it was with this thought in mind that I recently found myself sitting at the Northampton Childcare Association AGM contemplating becoming President again. For people who have read DOAFH from the beginning you may remember I initially took on this position around the same time I took parental leave to look after ZCP and allow Wifey to work on Mulga Springs full time.

While my first term of NOCCA presidency was dominated by trying to save the centre from imminent closure and whoring myself to the media in an attempt to do so it is my fervent hope that this time around I will indeed be faced with nothing more stressful than organising the roster for the annual cake store.

As is becoming the norm my blogs or more accurately diary entries are becoming less frequent, so much so that Rins the third of au pairs has recently finished her time with us and is off on a well earned jaunt down the east coast.

Rins has been an amazing addition to ZASH’s and indeed Wifey’s and my lives, she was with us during a time that saw ASH start school, ZCP start speaking properly and our family face some rather stressful times.

The last point is an important one as Rins is one of those rare people and I imagine virtually non-existent 18 year olds who works better under stress. While always highly efficient and great with the kids she stepped it up a notch when the pressure was on and we were all under the pump.

While undoubtedly the messiest of our Au pairs to date (sorry Rins but I know your parents are aware of the truth!) she had such an infectious personality and ability to make Wifey and I smile that resulted in the untidiness rarely annoying either us.

One of the many highlights of Rins’s time with us was the visit from her Mum, Dad and older sister. As was the case with Kenny’s (our first au pair) family spending some time at Mulga Springs was a highlight. I know Wifey and I am sure Kissa also finds it very gratifying to see people enjoy the farm not because of the impressive array of machinery (some of which Rins’s Mum drove) or the huge mobs of sheep but purely because of the simple natural beauty that punctuates Mulga Springs.

It wasn’t until I had got over the initial excitement of riding motorbikes, hunting expeditions and the buzz of trying not to fall off the back of a ute as Kissa sped off after a mob of “stupid old bitches” (ewes over the age of 4 who should know better) that I began to truly appreciate how beautiful the farm is.

It is one of those things in life that once you experience it for the first time you keep on noticing it and thinking about it, bit like a country version of ordering the same coffee from the same barista for weeks before finding out something interesting about their life that makes you look forward to seeing them every morning.

I can feel myself about to launch into one of my deep and meaningful soliloquies about life and the farming universe and as these rarely end well of anyone involved I think I will just finish writing about ‘Team Wittemann’s’ time in WA.

Providing it works out there is something very special about having an almost complete stranger live in your home sharing the joys and triumphs as well as the challenges and stressful moments that are the fabric of family life. To my mind that is essentially the experience of having an au pair, an experience which is enriched if you are fortunate enough to meet their ‘real family’ and get to know them.

Due to a work trip to Far North Queensland I wasn’t able to spend as much time as I would have liked with ‘Team Wittemann’ however I did manage to be coerced into a trip to Geraldton’s infamous nightclub with Rin’s and her older, naughtier sister as well as have some great conversations with our au pair’s lovely parents.

In relation to the aforementioned nightclub visit I am for several reasons still trying to come to terms with the experience. This is mainly due to the fact I had my arse pinched on two occasions by a short, chubby and somewhat balding ‘Queen’ an experience which left me so perplexed I had to rely on the girls to protect my virtue.

Possibly motivated by my run in with the hobbit like Queen I started considering the reasonably new phenomena of ‘man crushes’ and ‘bromances’ and realised that my latest addition to a list which includes cricketer Jacques Kailis and Josh Lyman from the West Wing was Rins’s Dad.

Successful in his chosen field with some seriously impressive beer drinking skills he is a dedicated family man and friend who is also not afraid to show his feelings. Basically he is just a legendary bloke who I thoroughly enjoyed hanging out with.

With Rins off on her east coast adventures in my next post I will introduce our new au pair and the family’s first ‘Manny’.

It is heading towards the middle of May and while seeding should be well underway a distinct lack of rain sees the air seeder sitting idle and everyone involved in Mulga Springs becoming increasingly anxious. How dry the region is was brought home to me a couple of days ago on a flight from Perth to Gero. As a peered out the window thinking about getting home and the fact I had drank too many glasses of Club Tarmac View Shiraz I couldn’t help thinking the landscape below resembled that of late January rather than early May.

All you can do is be positive, do the spraying and machinery prep so that when it DOES rain you hit the paddocks running and get the seeding program in as quickly as possible.

It’s only my eighth seeding campaign but to me at this time of year optimism is King which is why I am sure the huge cold front predicted for next weekend will bring with it the rain and therefore the seeding starter’s flag we are all waiting for.

Who would be a farmer or for that matter a farmer’s husband….. 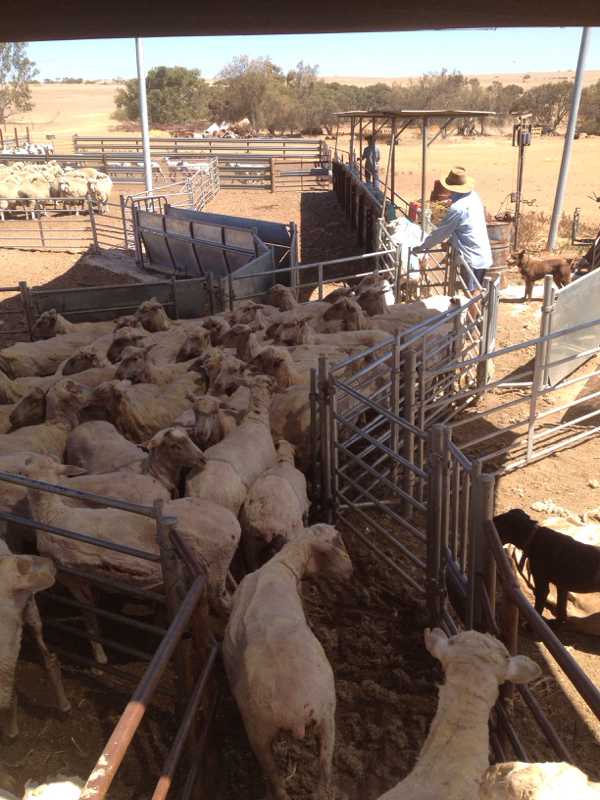 “You had a haircut?” 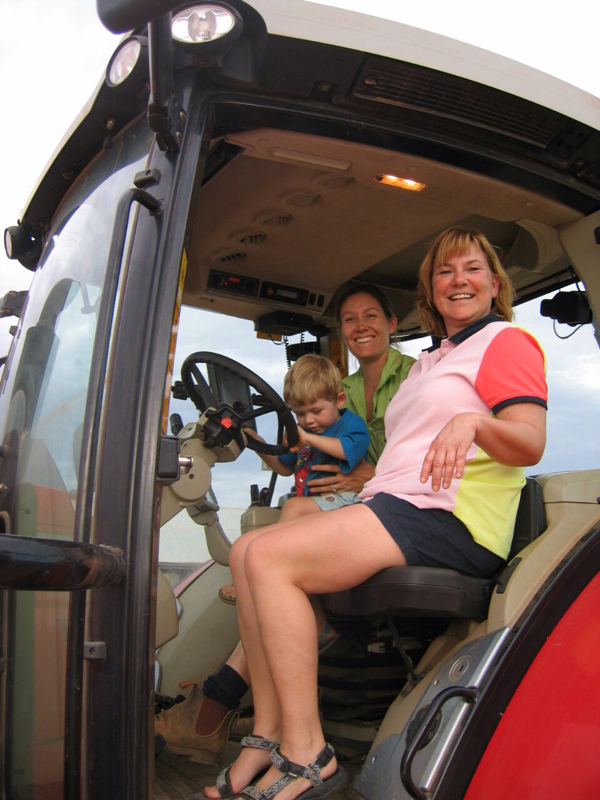 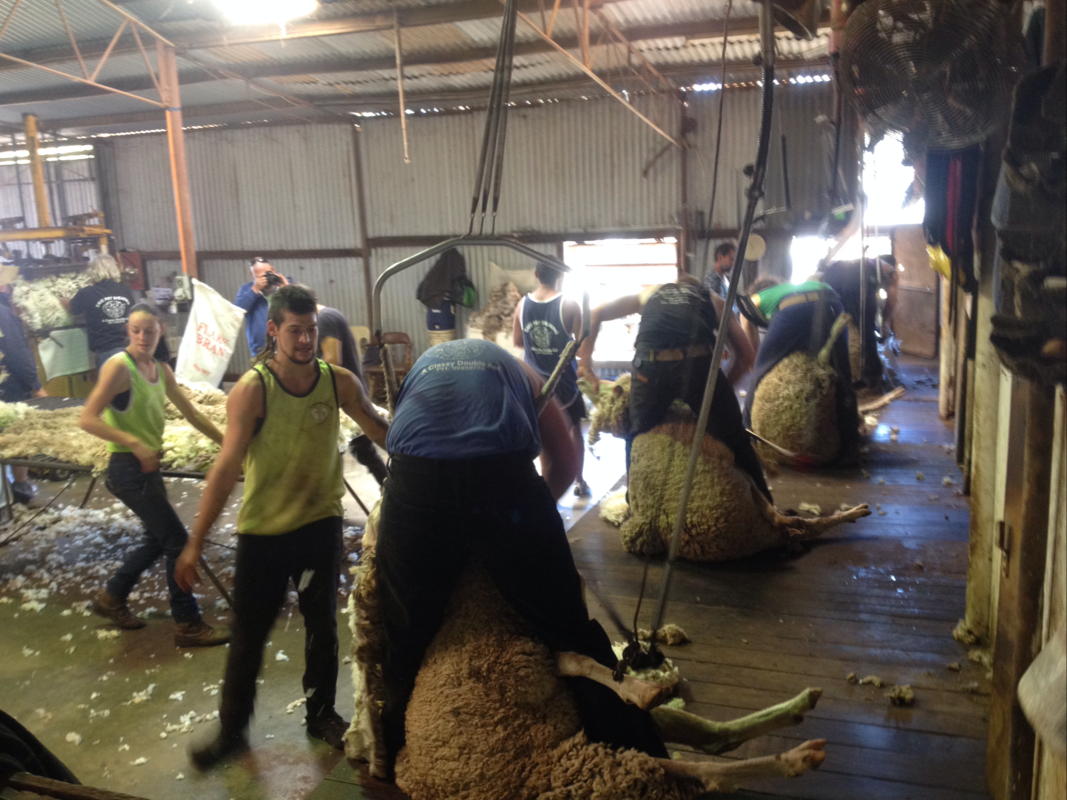 Team Fry getting it done- I needed a beer and a rest just watching then for hall an hour. 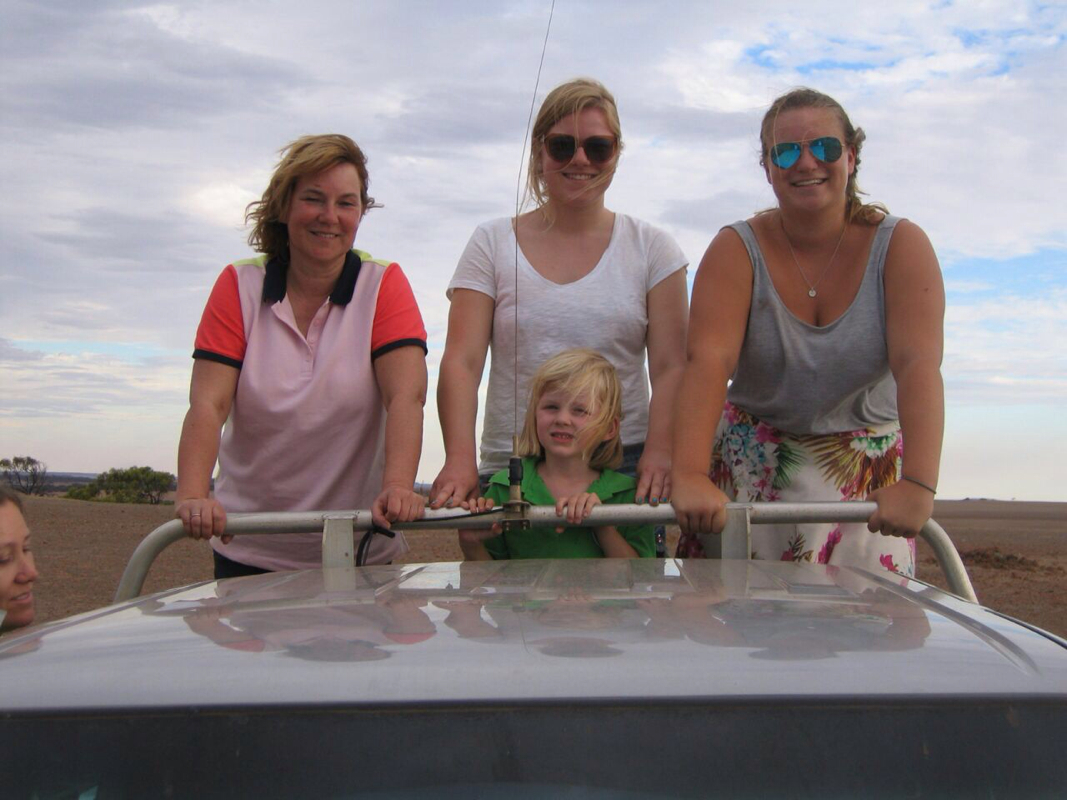 No farm visit is complete without a ride on the back of the ute. 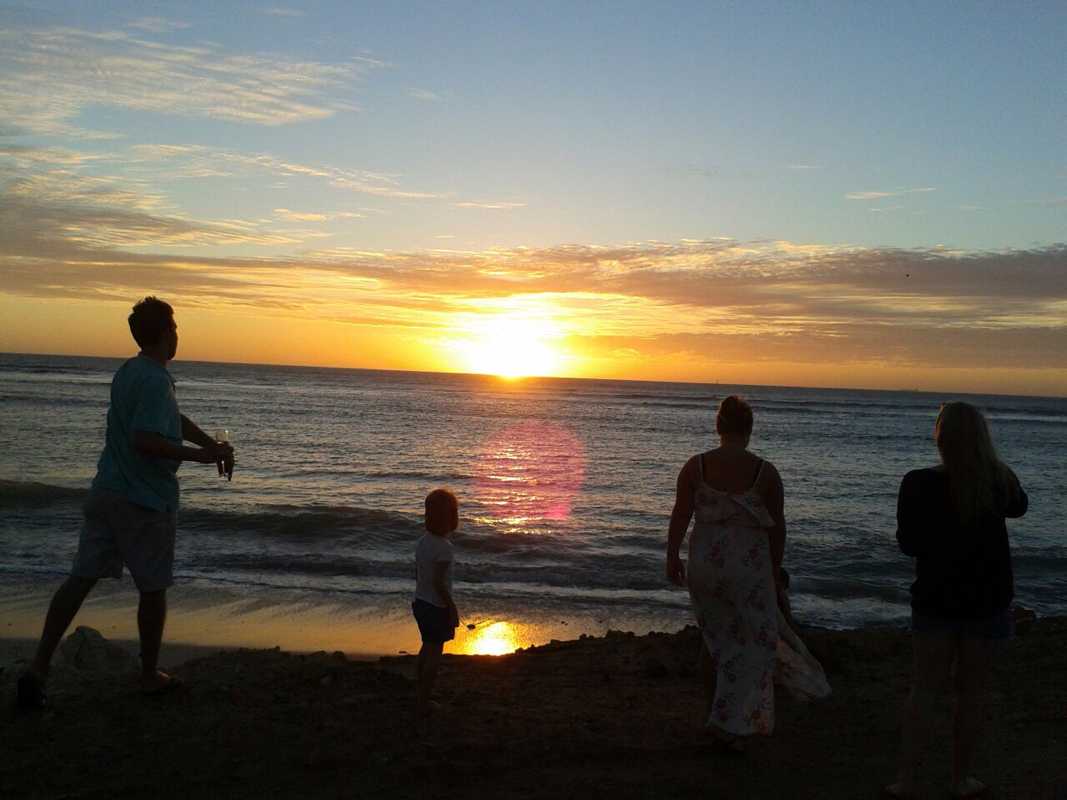 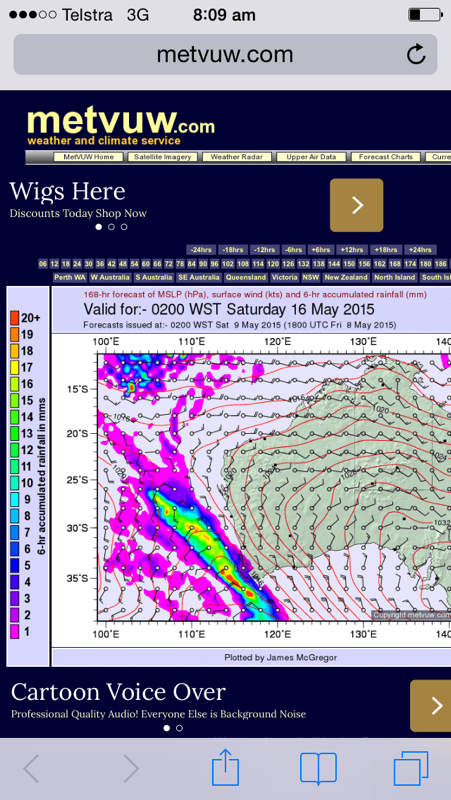