“I think that one of the biggest flaws of
mankind is that we become complacent with our lives.”
― Daniel Willey

As it relates to my world being complacent is the new ‘busy’ in actual fact I am seriously considering encouraging people to replace that tired old question of “Have you been busy?” with “How complacent have you been lately?”.

It is not that I haven’t been working hard or in actual fact achieving a modicum of success in my endeavours but more over I have neglected some of the things in life I derive the most pleasure from and it is in that regard I am transcending complacency.

When I think about all that has transpired since I last wrote DOAFH my sense of neglect is heightened to the point of embarrassment particularly seeing a lot of it has been related to milestones or successes at Mulga Springs. At the top of this list would be taking out the highest average at the Northampton (stud breeders association) ram sale and while this did lead to Kissa having to shout the bar this slight inconvenience was far outweighed by the accolades of how good his rams looked and even more importantly the fact that the hours of work put into breeding the rams had paid off.

An interesting side note to this was the impromptu sale that took place after ‘official proceedings’ finished with outbid buyers heading to M.Springs to snap up some of the rams not put in the sale. In hindsight this probably caused the biggest inconvenience of the day as it saw valuable time at the aforementioned bar sacrificed, having said that if you were to ask Kissa and Wifey if there is any cause that would warrant passing up on a celebratory beer it would be spruiking the virtues of their rams.

A very honourable mention from my period of ‘Blog Block’ goes to KK for turning back time in a way that would have made Cher jealous by not only winning the veteran’s shearing contest (which was a given) at the Chapman Valley Show but also winning the open shears. The fact that KK was old enough to be the Father (sorry mate but it is the case) of several of the other contestants was reason enough to celebrate this victory and the 4.5 litre bottle of Bundy rum that was one of the prizes certainly afforded us the opportunity to do so!

Our fourth au pair has also come and gone since my last post, Stefano or as I nicknamed him “The Italian on a stallion” after his first experience of horse riding was our first male au pair and was with us for what turned out to be an incredibly busy six months. His energy around the house and indeed on the farm was boundless and we will certainly be looking to have another male au pair in the future. Apart from the obvious contribution Stefano made to ZCP’s and ASH’s wellbeing he also unknowingly improved the quality of a lot of the lawns in the little cul de sac we live in. This interesting fact came to light at the street Christmas party where several of the women in attendance confessed to watering their lawns at exactly the same time as Stefano engaged in his daily post run exercise regimen on our front lawn and while the Water Corp would not be too pleased with these events there were certainly a lot of lawns and indeed middle aged housewives in a better frame of mind because of it….

Stefano’s departure to another au pair job in Darwin heralded the arrival of Lex (yes, I already have a nickname for her) who is in actual fact TJ’s (our second au pair’s) sister. The complete story is that there are actually three Juarez sisters who happen to be triplets and who have now all spent time in the Central West as au pairs. On that note Wifey and I would like to send our sincere thanks and gratitude to Bernie and Bea for not only bringing up three lovely daughters but also for letting them come and be part of our community, the other thank you is for that fantastic German white wine you send over with the girls!

Lex has made a seamless transition to the hectic Horstman household and apart from her amazing work with ZASH (my combination name for the children) she has taken up where her sister TJ left off in terms of taking WIfey’s side on every little verbal jousting session that occurs! Other points of interest in relation to Lex’s first month with us have included a run in with a fairly enormous crayfish and the perennial decision for all our au pairs when the AFL season is about to start in terms of whether they will be a Dockers or an Eagles fan.

In relation to which football team to choose I think it relevant to mention that during her time with us TJ chose the Eagles based solely on the fact in her opinion they had better hairstyles…….

I will finish off this comeback Blog with a tale of such enormity and significance (not to mention a small dose of personal pride) that it beggars belief. It was during our last lot of shearing that I was entrusted with ‘taking away a mob’ (relocating a large group of sheep to their designated paddock) all on my own, in fairness I did push the issue a little bit as I thought it was about time I had the chance to either succeed in a small but important task or conversely provide Kissa with another example of my agricultural ineptness that would keep his mates at the pub entertained for the foreseeable future.

Kissa initially did not seem keen to give me sole responsibility for some of his better ewes and it was only after I pointed out that he had been happy to trust me with his eldest daughter so why not some sheep that he acquiesced although I am pretty sure if Wifey hadn’t been standing there the result might have been different. Feeling somewhat happy with myself and my new found responsibility I hopped on the quad bike and prepared to set off, Kissa’s two parting comments were “don’t forget to shut the gate into the silo paddock” and “not sure how you will go as none of the dogs will work for you”.

Despite these lighthearted jibes from my Father-in-law I alighted the quad bike full of optimism only to quickly realise Kissa was right about Mulga Springs canine workforce as one by one the four principle working dogs ignored my calls to hop on the bike and trotted off after Wifey and Kissa. Feeling as dejected as the last kid picked in a game of backyard cricket I was about to admit defeat when I noticed that one of my sister in law’s dog, a three legged bitch called Drew had hung around and was actually going to come with me. Now if I am to be honest I have never been much of a fan of Drew however I will be forever grateful to her for coming with that me that afternoon.

As it turned out the sheepdog lacking one leg and the farmer’s husband lacking any kind of talent in sheep work did alright with that mob although if I am to be honest it probably took three times longer than it should have. 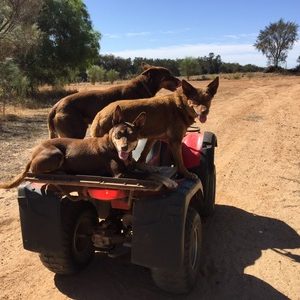 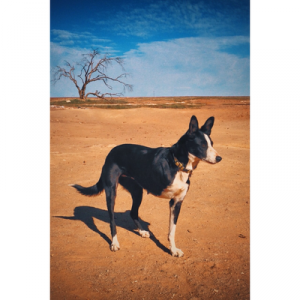 Drew, the only dog that stuck by me! 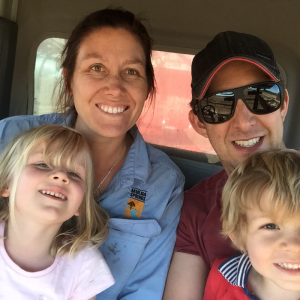 Family time on the Header 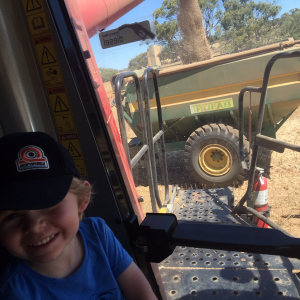 “wow this harvesting is interesting” 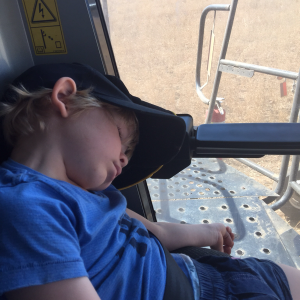 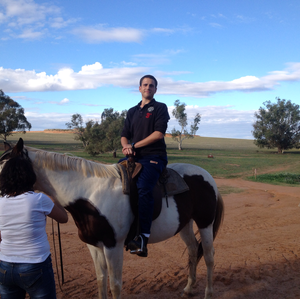 The Italian on a stallion 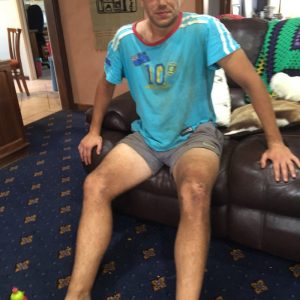 Stefano after a day at the farm