In finally getting around to writing this blog the quote that most appropriately describes the delay would be an all time favourite of mine in the form of “the best-laid plans of mice and men often go awry.”

My largest ever contribution to a harvest at Mulga Springs was supposed to be catalogued in two posts titled “From the Tarmac to the tractor” and “From the Members to the Massey” however I might have to combine the two in a vain attempt to get up to speed with what has been a fairly frenetic 5 weeks since my last post.

A lot of that freneticism has been due to the arrival of BNT which while was obviously an incredibly momentous and beautiful event will have to wait till my next blog (or maybe even the one after that) for further explanation.

My first stint as M.Springs’s sole chaser bin driver occurred when Kissa and MIL had to attend a funeral at short notice which led to me taking a few days annual leave to help KK out while he took over the header piloting duties. Having flown back in from Adelaide my usual wait at Club Tarmac View for the connecting flight to Gero was tinged with an unfamiliar feeling of nervousness as I realised it had actually been a very long time since I had been in a tractor. This uneasiness was coupled with the fact that at some point during the next few days I knew from past experience I was going to be asked to complete a task that would not only challenge my meagre farming abilities but also erode my usually unflappable self-confidence.

It was an odd feeling to pop in briefly to see a heavily pregnant Wifey and give ZASH a cuddle before being waved goodbye with my packed lunch in hand and heading up to M. Springs. True to form on my arrival I found KK in a typically relaxed mood although very keen to get on with “getting the crop off” although to be honest I think he was also actually pretty excited to have exclusive header driving rights for a few days.

In past posts I have mentioned KK’s shearing prowess and the fact for many years he was classed as what is known in the trade as a ‘gun shearer’ however it is fair to say his list of accomplishments does not end there. The position he held before joining us at Mulga Springs saw him run an agricultural college in the WA Wheatbelt where he was highly acclaimed as a very successful teacher and role model for the pupils who attended the school.

His ability to teach is something that while was obviously not a prerequisite to securing the position at M. Springs has certainly come in handy whenever I have needed to spend a significant time around heavy machinery and in this instance helped contribute to a very productive and somewhat trouble free few days.

Driving the chaser bin is essentially a role of two distinct parts which I have come to term as the “lull” and the “lunacy” . The “lull” sees you spend reasonably long stretches of time doing nothing while waiting for the header to harvest a full load (around 10 tonne of grain) and is punctuated by messing around on your phone (I discovered Gumtree this time around) listening to a book CD* or in my case hoping that you don’t f$#@ anything up the next time you drive to the field bin.

The “lunacy” starts when you hear on the two way “I’m full” and is punctuated by a mad dash across the paddock coupled with the not uncomplicated task of lining up the chaser bin with the header to allow the grain to be transferred from one piece of heavy machinery to another while they are both in motion. Once this is achieved it is back to the field bin to ‘dump your load’ so to speak into the field bin without spilling too much grain, hitting the side of the field bin or pissing off the incoming truck driver by blocking his path to aforementioned field bin.

The other big part of harvest is ‘shifting’ which involves moving all the equipment required for a safe an effective harvest from one location to another. Now while this sounds relatively simple when there are only two people available to ‘shift’ and the list of said equipment includes but is not limited to the header, the field bins, the chaser bin, the fuel truck, the firefighter, the header comb and two Utes it can present a logistical conundrum of mammoth proportions.

Now before I embark on the anecdote which will mark the end of this blog it is important to bear in mind that I once notoriously had quite a lot of trouble reversing and to be fair actually just towing a JetSki on a trailer so just imagine the bowel clenching anxiety I experienced as I found myself towing a 36ft header comb (which is not only critical to the harvest but also worth around $140k) behind Kissa’s beloved Landcruiser.

My initial concerns appeared groundless as 20 minutes later I found myself almost relaxing as I trundled after KK across a flat paddock feeling relatively comfortable that no Ill would befall me or more importantly the precious cargo I was towing. Fair to say this feeling disappeared faster than free bar snacks on a Friday arvo as I came face to face with what I will simply call “the ravine”. Now while KK maintained it was merely a shallow gully and all I had to do was “go really, really slow” to negotiate it I was far from convinced and felt this gully would have been more suited to a mountain range in Nepal than a wheat and sheep farm just east of Northampton…. 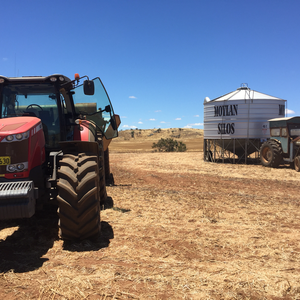 My tools of the trade for a few days 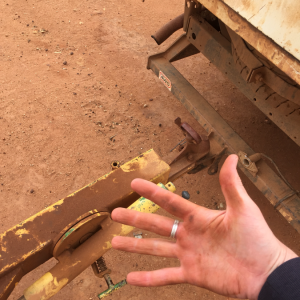 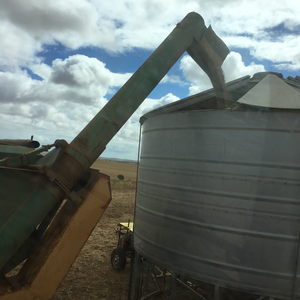 Successful dumping of my first load 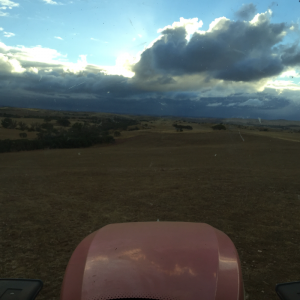 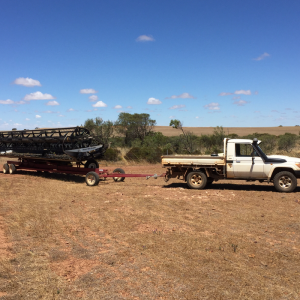 First attempt at a ‘pano’ shot on the iPhone, loving the clouds in this one 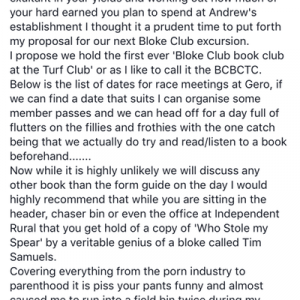 * Review of ‘Who Stole my spear’ the book CD which kept me company during harvest. 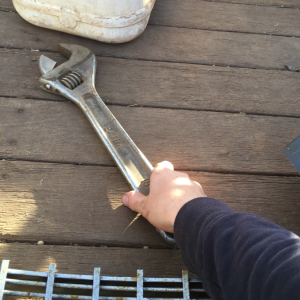 Apparently the type of moon isn’t the only type of crescent in existence. 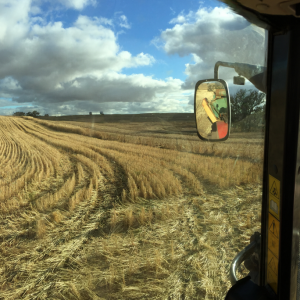 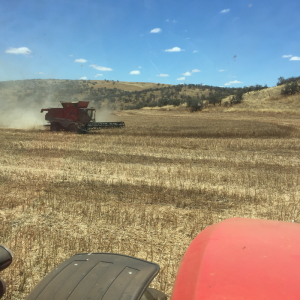 KK ‘going around in circles’