From the Members to the Massey

Babies, Becks and back to where it all began…

Not for the first time in this blog I have completely contradicted myself and have decided I will split last season’s harvest antics into two posts. Unfortunately for those of you who are keen to hear all about BNT’s (baby number three) arrival this means you will have to wait till my next post which quite honestly knowing me could be anywhere from 5 days to 5 months in the making so apologies in advance if it is the latter.

After the relatively smooth sailing that underpinned my first stint in the chaser bin I was completely unprepared for the Sydney to Hobart like conditions that marked my second attempt to help out with harvest, although things often go south in a hurry after starting off well.

Not unsurprisingly this chapter starts in Club Tarmac View although in completely different circumstances from the last in that I was filled with confidence (unfounded as it turned out) as to how well things would go at M.Springs and also that this time I had a travelling companion in the form of ASH.

ASH and I had spent a ‘Daddy/Daughter’ weekend in Perth together with the main catalyst for this (other than to spend time with my darling daughter) to demystify what actually happens to me when I jump in a cab and head to the airport. My departing home for business trips was becoming an increasingly traumatic event for ASH so Wifey thought if she accompanied me on a flight to Perth it might make it a bit easier for her to deal with me leaving.

A weekend which saw my Dad secure tickets for a stage performance of “Snugglepot and Cuddlepie”, coinciding with me being invited to the restaurant within the Ascot Members, seemed like a perfect opportunity to test the hypothesis. In this at least, the weekend was a success and ASH is now far happier when I head off to the airport; I would actually go as far as saying if there is anyone reading this in a similar position give this approach a chance.

Now during harvest delays are inevitable and caused by anything from a breakdown to unsuitable weather with some of these delays often stretching into days. Based on this you would think that a 10 min delay due to a quick toilet break or stretching your legs would be acceptable and in thinking that people you would be wrong, in actual fact I once heard from a Farmer’s Wife I used to work with on a childcare committee that when requiring a leak during harvest her husband would slow the header right down on a flat stretch of paddock jump out have a slash and then sprint to catch up with the header and keep on harvesting.

The problem I had on this particular day were the delays I caused were quite a lot longer than 10 mins and included but were not limited to: running the augur into the side of a field bin; causing the motor driving the PTO to overheat and seize up; somehow managing to get the PTO to repeatedly ‘pop-out’; taking the wrong track in a paddock and doing a bit of tree lopping with the chaser bin and generally managing to completely bollocks up anything I tried to do to fix aforementioned problems.

For those of you requiring explanations for any of these mis-haps I will do my best to describe them in the photo gallery however there is one I will try to dissect via prose as to me it is one of the funniest farm gaffs I have ever achieved. On occasion (mostly while driving hire cars) I have pulled up to a fuel pump and on exiting the vehicle realised that the fuel cap is on the other side of said vehicle which has led me to getting in the car moving it over to the next fuel pump only to realise that again I have pulled up to the wrong side of the bowser.

With that in mind imagine me doing the same thing while driving the chaser bin with the augur fully extended and the field bin being on the other side of the tractor. Add to that the truck driver just arriving and witnessing this brain fade and finally add to that indignity of the fact I drove around to the next field bin only to do exactly the same thing….

The part of this that really gets me is not that I did the same thing twice but that there was actually someone there to see me do it as during harvest you often go hours without seeing a single soul (which to be fair in the past has saved me having to explain any number of minor stuff ups!). 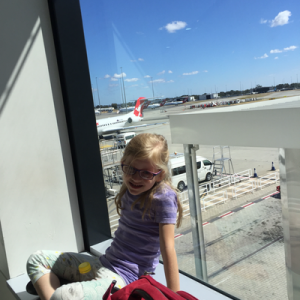 ASH at airport all ready for our ‘Daddy/Daughter’ date 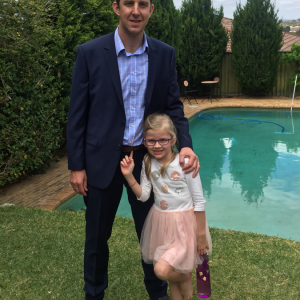 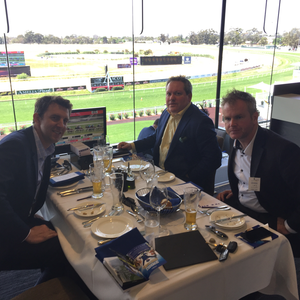 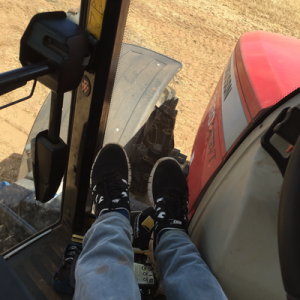 to the Massey (note the totally inappropriate farming footwear) 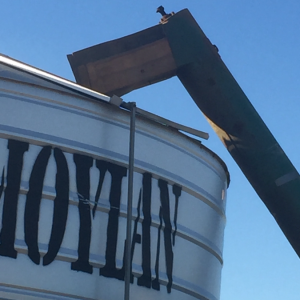 ‘Popped’ PTO and probably too close to field bin 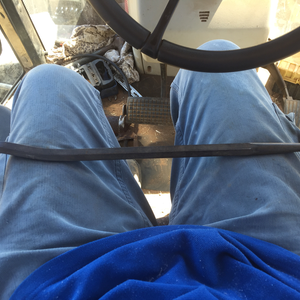 The ‘tool’ I used to ‘fix’ (bash repeatedly) the PTO 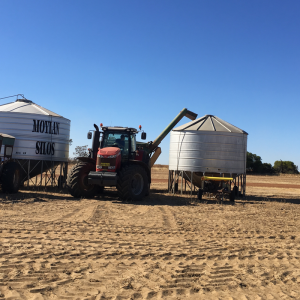 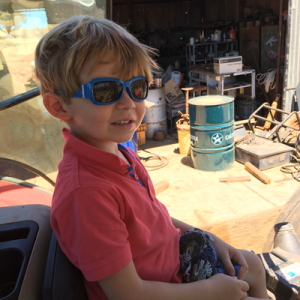 “How long to fix it this time Dad?” 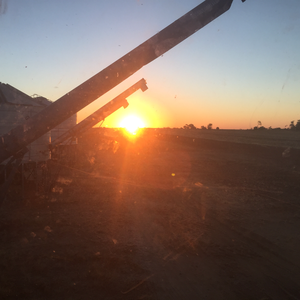 The sunsetting on a very long day.